Lee and Jill both grew up in small towns southwest of metro Atlanta: Lee hails from Carrollton and Jill hails from Palmetto. They met while attending the University of Georgia pursuing degrees in animal science. After they married, they began searching for a place to call their home.
The couple wanted enough land to garden and raise animals in a country setting that was about equal visiting distance to their families. When they started searching for property, Chattahoochee Hills was still an unincorporated rural area in Fulton County, the largest county in Georgia. A relative suggested they look there after seeing a log cabin for sale.
The rural nature of the area very much appealed to them. As they drove the country roads in Chatt Hills scouting for the cabin, they loved seeing the open pastures dotting the country side, some with row crops, others with cattle, horses, and goats. Modest farm homes set close to the roads had been built near crossroads communities where early settlers first lived. Further out, they caught glimpses of more homes tucked behind the tree-lined roads.
They began imaging their life in this small community: raising horses and maybe a goat or two, tending a garden with vegetables and plenty of flowers, Lee establishing a veterinary practice in a nearby town, Jill working near enough for lunch dates.
Nearing the address of their destination, they slowed at a break in the trees and caught a glimpse of the log cabin in the distance. When they pulled off the paved road onto the winding gravel driveway for a better look, they knew they had found their home.
To view Lee & Jill's barn quilt, they invite you to pull into their driveway and park at their property's gate while taking a photo. 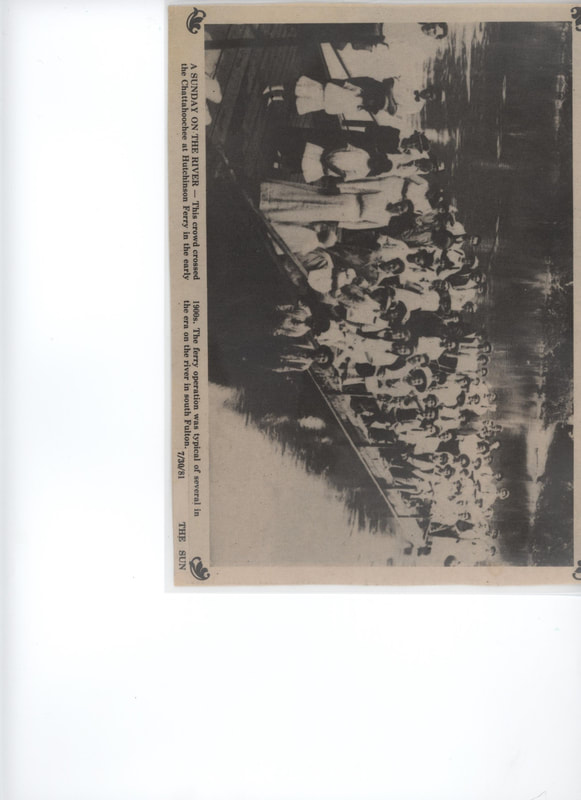 Hutcheson Ferry, back in the day.
Lee & Jill's property is situated about equal distances between two historic crossroads communities: County Line (2.5 miles south) and Rico (3 miles north). However, it is more likely that their property was once a part of a much larger farm that utilized the County Line crossroads community.
The County Line area was settled by James Hutcheson, a native of Ireland, after he purchased 10,000 acres of land in Carroll, Coweta and Campbell counties through the 1827 Land Lottery. A blacksmith by trade, Mr. Hutcheson branched out into a number of different business ventures. He operated a mill and well and plow manufacturing company in nearby Carroll County and, along with his nephew, Arthur Hutcheson, farmed a plantation and ran a general store on his property at Hutcheson Ferry Road. Growing cotton and corn, James Hutcheson augmented his commercial holdings with a double cotton gin run by a steam boiler and by operating the ferry crossing just to the west of his home.  His daughter, Sarah, married John Redwine in 1871 and the couple eventually inherited the Hutcheson property. Their son, Frank Hutcheson Redwine, continued to operate the general store until it burned in 1910 and the family leased much of their land to tenant farmers during the late nineteenth and early twentieth centuries. By the 1950’s, farming had ceased to be a profitable enterprise in Campbell County and much of the Redwine property was sold. (Source: Chatt Hills History)
www.chatthillsbarnquilttrail.com  | Created by Write Place Designs | 2020