Life on the south side

Emmett and Sara are south-siders at heart. In the early years of their marriage, they enjoyed living in Atlanta, East Point, and College Park -- all towns within an easy commute to their south-side jobs. The couple was living in Cliftondale when they began to think about finding a larger home for their growing family.
On a whim one day, Sara kept driving (south, of course) after dropping her kids off at school. Her impromptu road trip brought her to the rural community which would later become the city of Chattahoochee Hills. The area reminded her of her roots growing up in Alabama, with farmlands, tree-lined roads, and homes that were few and far between. When she mentioned to Emmett she thought they should look in this area for their next home he said, "Why do you want to live out there? The kids won't like it. As it turned out, Emmett was right. The kids didn't "like it," they "loved it."
The family set about making their house a home, which turned out to be the "cool place" all the kids liked to go to after school. Their children jokingly called their home, "The Compound" and as they grew up, left home, and began their own families, they loved returning there for gatherings with families and friends.
After Emmett and Sara retired, they both enjoyed keeping active lives but also taking time to just watch the grass grow. Sara, who had always loved decorating and collecting butterflies, stepped up her hobbies. When their garden tub was no longer needed in their bathroom, she had the idea to make it a focal point in their backyard. With the help of her neighbor, the tub became a small pond, which she landscaped with hand-stenciled stepping stones, painted stones with each grandchild's names, and of course, many yard butterflies. 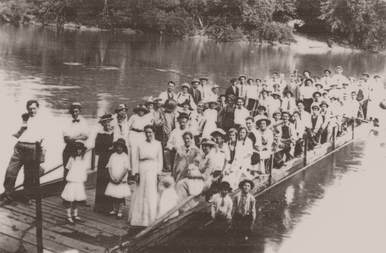 Hutcheson Ferry, back in the day.
The Hills' property is situated about equal distances between two historic crossroads communities: County Line (2.5 miles south) and Rico (3 miles north). However, it is more likely that their property was once a part of a much larger farm that utilized the County Line crossroads community.
The County Line area was settled by James Hutcheson, a native of Ireland, after he purchased 10,000 acres of land in Carroll, Coweta and Campbell counties through the 1827 Land Lottery. A blacksmith by trade, Mr. Hutcheson branched out into a number of different business ventures. He operated a mill and well and plow manufacturing company in nearby Carroll County and, along with his nephew, Arthur Hutcheson, farmed a plantation and ran a general store on his property at Hutcheson Ferry Road. Growing cotton and corn, James Hutcheson augmented his commercial holdings with a double cotton gin run by a steam boiler and by operating the ferry crossing just to the west of his home.  His daughter, Sarah, married John Redwine in 1871 and the couple eventually inherited the Hutcheson property. Their son, Frank Hutcheson Redwine, continued to operate the general store until it burned in 1910 and the family leased much of their land to tenant farmers during the late nineteenth and early twentieth centuries. By the 1950’s, farming had ceased to be a profitable enterprise in Campbell County and much of the Redwine property was sold. (Source: Chatt Hills History)
www.chatthillsbarnquilttrail.com  | Created by Write Place Designs | 2020