Hospitality and. . .the making of Serenbe

The Nygrens enjoyed their early years on the farm, making their house a home, exploring the countryside, and getting to know their neighbors. In 1996, they turned their country home into a B&B for friends and family to visit, and once again they were blissfully content.
Then, in 2000, Steve and his oldest daughter, Garnie, discovered a bulldozer taking down 12 acres just off of their property and immediately feared that suburban sprawl was approaching their paradise.
Steve sprang into action and over the next few months he purchased another 600 acres, but realized 900 acres was not protection from urban sprawl.  Soon other concerned neighboring landowners joined the discussion, which lead to the creation of the Chattahoochee Hill Country Alliance, the  Fulton County overlay regulation in 2002, and the formation of the city of Chattahoochee Hills in 2007.
​          The model to build with nature, rather than against it, and to preserve 70% of the land for permanently protected agriculture open space has become a national model. In 2004, ground was broken on the first Serenbe homes to demonstrate how these regulations could be acted on. As of 2021, there are three neighborhood “hamlets” with over 800 residents. Serenbe is known as an international model on how to build communities centered around land preservation, wellness, connecting to nature and community.

Heritage story . . . landowners of the past

The Inn at Serenbe, located just east of the historic Goodes Crossroads Community, is the circa 1905 home of the Barnes Family on land purchased from James Robinson’s grandad.  Robinson’s purchase of 600 acres in 1860 was the exchange for mules, wagons, seeds and tools with no money changing hands. The note on the two page deed clarifies there are Indians at the waterfall. The Nygrens, who now have three generations on the land, are the fourth family to steward this land since 1860.
This New South Cottage house, which is now the Farmhouse Restaurant, was the center of an 284-acre farm occupied by the Barnes family for three generations. The home continued to be the center of community activity and meetings as the Nygrens led the Chattahoochee Hill Country effort. The draft charter for our new city was finalized in that dining room before being presented to the Georgia Senate for approval in 2006. 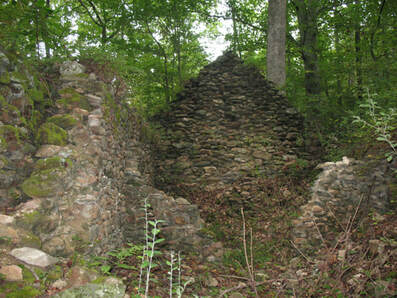 Remains of the Condor stone dairy house
The 1,200 acre boundary of Serenbe includes other historic farm properties.  Part of the Shell farm off Atlanta Newnan Rd where the fireplace and building foot prints can be seen will be preserved through the development of a new Deer Hallow Park near Serenbe’s main entrance.            Near Serenbe’s future south entrance off of Shell Road on the Coweta side of the property is the Condor Family Cemetery and ruins of several outbuildings. In 1840, John Condor purchased the farmland  and  moved  his  wife,  Emily  and  their  three  children  to  Coweta  County,  Georgia.  Three more children  were  born to this union prior to Emily’s death during child birth on August 19, 1847. Ann Smart, who nursed Emily,  married John Condor on October 11, 1849. According to records  and the inventory of John’s estate, he was a prosperous farmer who had a cotton gin on the farm. They grew some of the first Yates apples in the area and had the first registered Jersey herd of dairy cattle in Georgia. The family’s ingenuity is demonstrated by studying the ruins of the stone dairy house which was constructed of double rock walls with a space between the walls through which  water from a nearby spring flowed, keeping the building cool for storing milk and butter. John Condor made two trips a week by train to Atlanta to deliver his milk products. During one of those trips during the War Between the States, he was exposed to smallpox. He died on December 4, 1862 and is buried on the property.
Prior to the settlers of the early 1800s, this land was occupied by and farmed by Native American Creek tribes in the 1600 and 1700s and the Mississippian Indians over 2,000 years ago. One fragment identified as a agricultural tool carbon test as 9,000 years old. The Nygrens hope to one day help facilitate the development of a museum near the old Condor farm ruins to memorialize the agrarian history of the area.  A trail from this area leads to the hill which is referred to as Indian Rock where a large rock was adapted centuries ago to form a large mortar to crush acorns into Wiswish, a flour-like substance which was a key part of Native Americans food staples.
www.chatthillsbarnquilttrail.com  | Created by Write Place Designs | 2020