Ray and Jean's home of 62 years on Hearn Rd. Their new barn quilt is in the back.
Like most country roads in Chatt Hills, Hearn Rd is best appreciated at a slow pace. Those out for a stroll, or bike ride, or Sunday drive will notice the fresh country air and the hint of farm animals; the farmsteads with lush pastures, ponds and shade, home to cattle, goats, and horses; the beautiful homes, some new, others weathered with age.
Most all of the land surrounding this two-mile loop road was once owned and farmed by the Hearn Family. Ray grew up in the old house at the bottom of Hearn Rd, now barely visible through the thick brush. His father was a farmer, and Ray grew up loving farming, following in his father's footsteps, helping out around the farm and learning the ropes.
Ray might have never left his beloved home, if not for his service in the U.S. Army. He served in the transportation field and remembers being stationed in Newfoundland and seeing Queen Elizabeth's ship while it was docked in the area. As special as that was, it wasn't the highlight of his young adult life. That came while he was on a blind date and met the love of his life and future wife, Jean.
Jean grew up in East Point, Georgia, a few towns north of Ray's homeplace. The couple married in 1958 and spent a year living in East Point while they built their house on Hearn Rd. Jean says that was about the only time Ray would leave his beloved farm. They moved in their new home in 1959, raised their family of two sons and one daughter, and have lived there 62 years as of August 15, 2021.  Ray will be 89 in November and continues to farm 35 head of cattle.   ​

The following heritage story about the Hearn family was written by Bettye's husband, Dr. Harvey B. Hearn (deceased) in the book, "Palmetto: A Town and Its People," (published 1980). 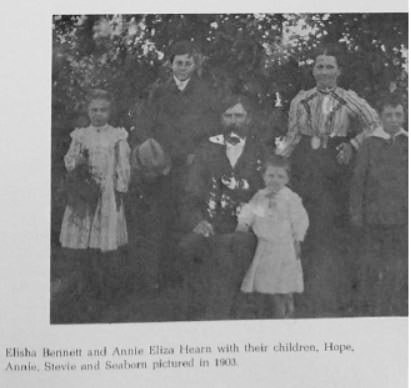 The Hearn Family
Submitted by Dr. Harvey B. Hearn

The Hearn Family has been in America since 1681, when William Hearn came from England and settled in Maryland.  He received a land grand and built a farm home called “St. Kitts,” which is still family owned. The next four generations lived in North Carolina until 1850, when Ebenezer Hearn came to Campbell County (1), Georgia, as a young lad of about eighteen.
On September 25, 1899, a tragedy struck the Hearn family and all of Palmetto. There were several businesses located in Palmetto at a spring on Roscoe Rd. These included a cotton gin, a grist mill, and a planning mill, all of which were run by a steam boiler using water from the spring. The boiler exploded, killing Daniel Pierce Hearn; Joshua Parks Hearn, a son of Daniel; Willie Penn Hearn; and a black man. The industrial complex was destroyed. Daniel and Joshua were brothers who had joined the church together and they died together.
Ebenezer (Ibben) Hearn, who came and settled at Palmetto, was a Confederate soldier who died at the end of the war, having ridden a horse home in the rain while sick with measles. He is buried in a cemetery near the end of Hearn Road. Ibben was the father of Elisha Hearn. Elisah Hearn is the father of Hope, Stevie, Seaborn, Cleo and Annie Hearn. Elisha, Hope, Stevie and Seaborn are buried at the Sardis Church cemetery at Palmetto (as are Cleo and Annie.)
The young adult generation of the Hearn Family is the 10th generation to call America their homeland. The Palmetto Hearn clan has been in this generation for five generations.