Making the move to Country life 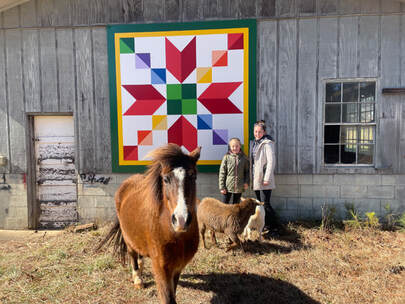 Megan grew up in Douglasville, Georgia, a mid-sized town adjacent to Chatt Hills.  She recalls visiting its Serenbe hamlet before it became so popular, enjoying a meal at Blue Eyed Daisy, hiking its trails, visiting its open houses.  She loved it and the surrounding rural areas, and returned often for weekend visits.
Years later, she was living in Vinings, a charming town northwest of downtown Atlanta. But as her children got older, she longed for a place with more space for the kids to "run and play" and enjoy nature. Her fond memories returned her to Chatt Hills where she found a rental property with all the makings of a country home. Over the next five years, the family fully embraced country life. They bought their first animal -- a puppy for the kids -- and then a pony. They enjoyed the small flock of sheep friends kept on their property. And the kids attended the Chattahoochee Hills Charter School, a school created by this community with a curriculum that integrates the wonders of the natural world.
When the time was finally right for Megan to purchase a home, she discovered slim pickings and bidding wars. She contacted a realtor for assistance, gave her a wish list, and hoped for the best. To her delight, the realtor showed her Ms. Becky Peek's homeplace, which had just come on the market but hadn't been listed yet. It checked every box on Megan's wish list, and then some. After purchasing the home and settling in, Megan's neighbors from the Peek family made her feel right at home, welcoming her to the community and taking her under their wings.

Megan purchased the homeplace previously owned by Mary Rebecca “Beckie” Peek (May 25, 1931 - Jan 20, 2019) and Charles "Billy" Peek (July 8, 1929 - 5 Oct 2005).
The Peeks were members of a generational family, or what is referred to as a "Heritage Family," in Chattahoochee Hills. Many members of the family would gather at Beckie's homeplace for Sunday dinner, and as Megan recalls, the large family table that seats 10 was still there when she first saw the home.
According to the family history in the book, "Palmetto: A Town and Its People,” Billy Peek's parents, Charlie B. Peek and Bessie Eidson, lived in the area that is now Chattahoochee Hills and had six sons: Robert, Billy, Dan, Jack, Ned, and James, and four daughters: Hilda, Alice, Peggie, and Lynda.  Billy, Dan and Ned were business partners and owned Peek Brother's Garage, Palmetto Auto Parts, and Palmetto Used Cars, in Palmetto, Georgia.