Salt of the Earth . . . with a little pepper added

Hal and Sandra live the country life their forefather's had in mind when they settled in Chatt Hills during the 1800s: Carve out a piece of property, raise a family and establish a farm, do an honest day's work that has meaning, and help build a strong community for now and future generations.
Hal spent a lot of his childhood with his grandparents Denzil and Baby "Louise" Hopkins when they lived on the property that is now his own. The property is special to him, and as other parcels of heritage land became available, he set about to establish his farm as far as his eyes could see. He named his farm the "Happy Crappy Farm" with the thought that it would never look like the over-the-top farms in magazines -- in fact it might look just a little crappy -- but it would be a happy place. His resident animals include meat goats, a donkey named "Rachel" who is the guardian of the goats, and the community pet "Buddy Love" -- a Beef Master bull that was bottle fed as a calf.
Sandra developed an affinity for history when she married into Hal's family and began researching his extensive family line. She established strong ties to this community when they made Chatt Hills their home in 1979 and she landed a job teaching 5th/6th grade at the Rico Elementary School down the road. With only 20 students in each class, the country school was more like a modern-day private school and was considered one of the best in the area. Over the years she had the privilege of teaching nearly every child in the community, and those kids became an extended family for all who worked at the school.
The couple raised two children, Emily Huffmaster Ewing and Denzil B. Huffmaster. Denzil, who is named after Hal's grandfather, also lives on original "Hopkins Homestead" property. His daughter​ is the 8th generation to still be living on the original homestead.
Hal is now retired from the Ford Motor Company Assembly Plant that was in nearby Hapeville. He loves spending his time taking care of his farm, mowing the grass, and riding his beloved Harley motorcycle. Sandra is retired as well loves spending time with her family and church. Over the last decade, she also joined the many citizens who helped establish the City of Chattahoochee Hills. She served on its Comprehensive Plan committee that created the original plan to keep Chatt Hills "Deliberately Rural," and she was a founding member of the Chatt Hills Historical Society. 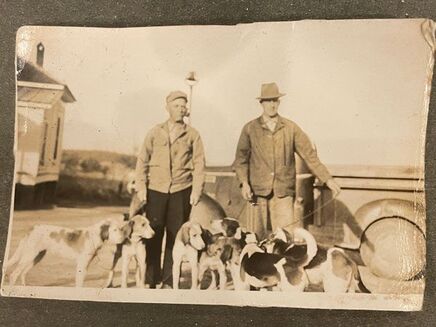 Denzil Hopkins (Hal's grandfather) pictured left next to Abb Phillips, preparing for a fox hunt at the Phillips House @ 1945.
Whiley Hopkins acquired much of the land on both sides of Hopkins Road in the 1830s and the north end of Old Phillips Road bringing with him his father, Hampton Hopkins, from North Carolina.  His homeplace was located on Hopkins Road.  His youngest son, Henry Marshal Hopkins, built what was called the “Hopkins Homeplace” on the corner of Hopkins Road and Old Phillips Rd. Two 6th generation family members still own the land around the Henry Marshal Hopkins homeplace. Seven descendants of Hampton Hopkins still live in Chattahoochee Hills today.
Most of the trees you see today were not present in the early 1800’s.  The land was cleared and terraced for cotton crops.  Over the years the original homestead land has been parceled off and sold but there are still four property owners that are descendants and still own some of the original property.
www.chatthillsbarnquilttrail.com  | Created by Write Place Designs | 2020