Dressing up at the party barn

Judy Crawford and her husband used to love coming to the area that is now Chattahoochee Hills to visit with their old school chum Ray Milam. Back then, Ray owned most of the land on Piney Woods Church Rd, and would invite friends to his lake for country gatherings. When Ray offered to sell them a parcel of land, they purchased 5 acres and built their house in 1996. Three years later, they added a party barn to continue the tradition of country gatherings.
The party barn became the "go to" place for social and holiday gatherings and often brought the adult children, Joel, Tammie, and Christie, and their families home for a visit. During Easter, Thanksgiving, and Christmas the party barn often swelled with up to 50 people enjoying each other's fellowship. In the fall, watching football games at the barn offered a type of "country tailgating" with halftime fun spilling out to the large farm yard. Then there was the "no special occasion days" made special by guests dressing up and singing like their favorite rock stars.
The party barn holds a lot of memories -- and a lot of love -- for Judy's family. It also holds a special place in the hearts of the community.

The year was 2006. A small community 20 miles south of Atlanta, Georgia, collectively put their heads together, trying to come up with a plan to prevent urban sprawl from swallowing up their farmland and rural way of life.
Previous attempts to annex their unincorporated area into the adjoining county failed. A more recent attempt to annex into an adjoining small town also failed. With lessons learned, they formed the "Chatt Hills Organizing Committee" to research the viability of creating a "Future City in Chattahoochee Hills."
The group realized that information would be the key to a successful mission. More than a hundred volunteers joined committees to research different aspects of cityhood.  Judy Crawford served on the communications committee, which was responsible for publishing the committees' research and coordinating community gatherings to share the information.
When the feasibility study was published and presented to the community on May 19, 2007, it was good news: The  community's tax base could support a new city. With that, a referendum was added to the June 19 ballot calling for a vote.
On June 19, 2007, an anxious group of community volunteers gathered at Judy's party barn to await the results of the referendum. Somehow, meeting out in the country, in a barn filled with new and old friends, seemed the perfect place to receive the news, be it good or bad.
Before the sun set, the news was received: Nearly 50 percent of the 1,381 eligible voters cast their ballots on June 19 to incorporate the city of Chattahoochee Hill Country: 569 voted Yes, 112 voted No. 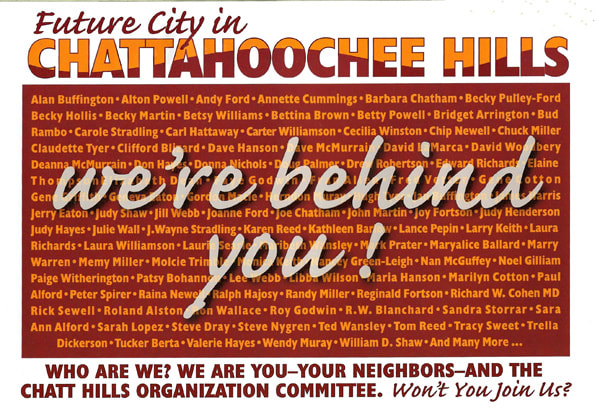