Wendy and Frank are owners of two popular restaurants: Maguire's Irish Pub in Senoia and Crosstown Grille in Peachtree City. Their tag line, "Family * Friends," expresses their core values; however, if their sign was a bit larger, it might also include, "Community and Pets."
While living in Fayetteville, Wendy became an avid bicyclist. She met new cycling friends, joined cycling clubs, and began training for charity rides. One of her longer training rides -- a 50 mile out and back route -- brought her to the Serenbe Hamlet in Chattahoochee Hills. She loved riding the long stretches of rural roads in Chatt Hills, admiring the country scenes of open pastures dotted with farm houses and animals. And she also loved the change of pace once arriving at Serenbe, with its residents and visitors milling about the homes and shops.
When Wendy and Frank became empty nesters and were ready to down-size their home, Wendy knew exactly where she wanted to move – Serenbe. She loved the sense of community there and had already made many friends. Frank liked Serenbe too, but wanted a bit more land for their many pets (and many more to come), so they agreed to look in the nearby rural area. When their real estate agent took them the long-way-around a gravel road to a log cabin set back from the road, the couple knew they had found home.
At The Farm, the couple soon filled their empty nests with a variety of farm animals. Some were rescued, others fostered, and many more gifted by friends. As for bicycling, Wendy soon discovered the joy of riding bikes on gravel roads. She learned of a popular charity ride called the "Gravel Grinder," which benefits Mountain Bike Atlanta and Pedal for Pets. The couple sponsored the events through their restaurants, and also hosted two of the Gravel Grinders. While Frank doesn't ride bikes, he finds driving his tractor and working The Farm a great source of stress release and exercise.
Frank and Wendy have found the perfect balance of city and country life, working their restaurants in nearby small towns while living a country dream in Chattahoochee Hills.
​ 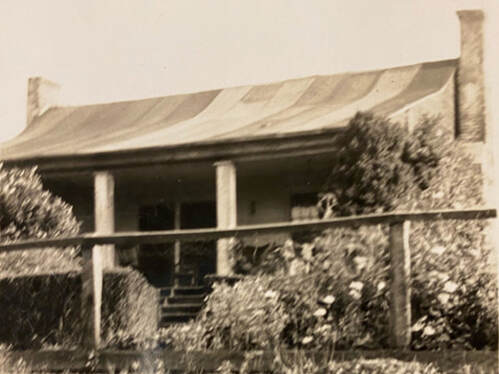 Homeplace of Henry Marshall Hopkins
Frank and Wendy's property was previously owned by the Hopkins Family, one of the earliest settlers to the Goodes Community (in what is now Chattahoochee Hills, Georgia.)  The following information is from the book:  "Palmetto: A Town and Its People," (published 1980), the Wiley Hopkins Family webpage, and a neighboring family.
Wiley Hopkins (1804-1883), came to the Goodes Community about 1830. He married Frances Daniel Smithwick in 1835, and purchased 202 1/2 acres of land in 1837 for $305. He acquired more adjacent land over time and had all the land on both sides of Hopkins Rd and the top part of Old Phillips Rd.  The couple were farmers and had 15 children.
Henry Marshall Hopkins (1860-1950) was the youngest son of Wiley and Frances, born when his father was 55 and his mother was 39.  He married Emma Ella Buran in 1881 and built a home, referred to as the Hopkins Homeplace, at the intersection of Hopkins Rd. and Old Phillips Rd. [The homeplace is no longer there, but the brick wall and boxwoods still mark the site.] The couple were also farmers and had at least seven sons and six daughters.
Dorothy Hopkins McClendon (presumably their granddaughter) captured a slice of life in these snippets of memories:
"Grannie always sent cards to all the children to come when she cooked the chittlin's.  On Sundays her table was maybe
filled three times; her Christmas cakes were 7 layers; her chickens and turkeys stayed under the well house; wash day and the oak stump where the clothes were washed; Old Kate-granddaddy's mule; small English peaches; sleeping on straw mattresses; Granddaddy in the field; walking to the mail box; ice cream which was thick custard -- frozen; Aunt Sister and Aunt Zera making doll clothes; the tire swing; toting water from the well up two flights of steps into the house; getting in
stove wood; family reunions and finally the biscuits from the tin safe that we punched a hole in for butter and sugar about mid-morning."
www.chatthillsbarnquilttrail.com  | Created by Write Place Designs | 2020